In the late 1980s something occurred in skateboarding that hadn’t really happened before. Skateboarding reached a crossroads, and the vert superstars' superstardom was beginning to wane. Skateboarding wasn't dying, it was just changing. Street skating, which was previously looked at as a warmup to skating vert, and classed as a bit of a joke, was now coming into its own. Whilst it had been around a few years, companies were not jumping on it, and 'street pros' were almost non existent. This changing of the guard was ironically led by two freestylers, Steve Rocco, Rodney Mullen, and their fledgling company, World Industries. During this era, something else occurred in skateboarding that hadn't really happened before - sponsoring toddlers...

One of the first skaters on World was a very small child named Chris. Now, I am sure a tiny kid skating a microscopic slidebar on the street, and backside 360ing in full pads and helmet didn't seem like much of a threat to the Bones Brigade at the time, but believe it or not, he was indeed part of this developmental stage of street skating as we know it - and incidentally a very small (about 4 foot) part of the demise of a lot of established vert pros' careers.

Although shorter than his body height, Chris Branagh's part in Rubbish Heap video showcased him doing a handful of the ‘in’ tricks that pros twice his age were trying to perfect. The nursery rhyme soundtrack, as well as the subsequent and deserved bullying he receives from Jeremy Klein and Ron Chatman in the same video only made you love the little shitbag even more. Then there was his part in Love Child...
Chris Branagh was a formative part of World when he was a fetus, so I have always wanted to know how he got on, how much he was bullied, and what the deal was with his brother and the worm. Chris was definitely not the chattiest person I have ever interviewed, in fact sometimes he barely wanted to answer at all, but nevertheless, after numerous back and forths, we finally got there... 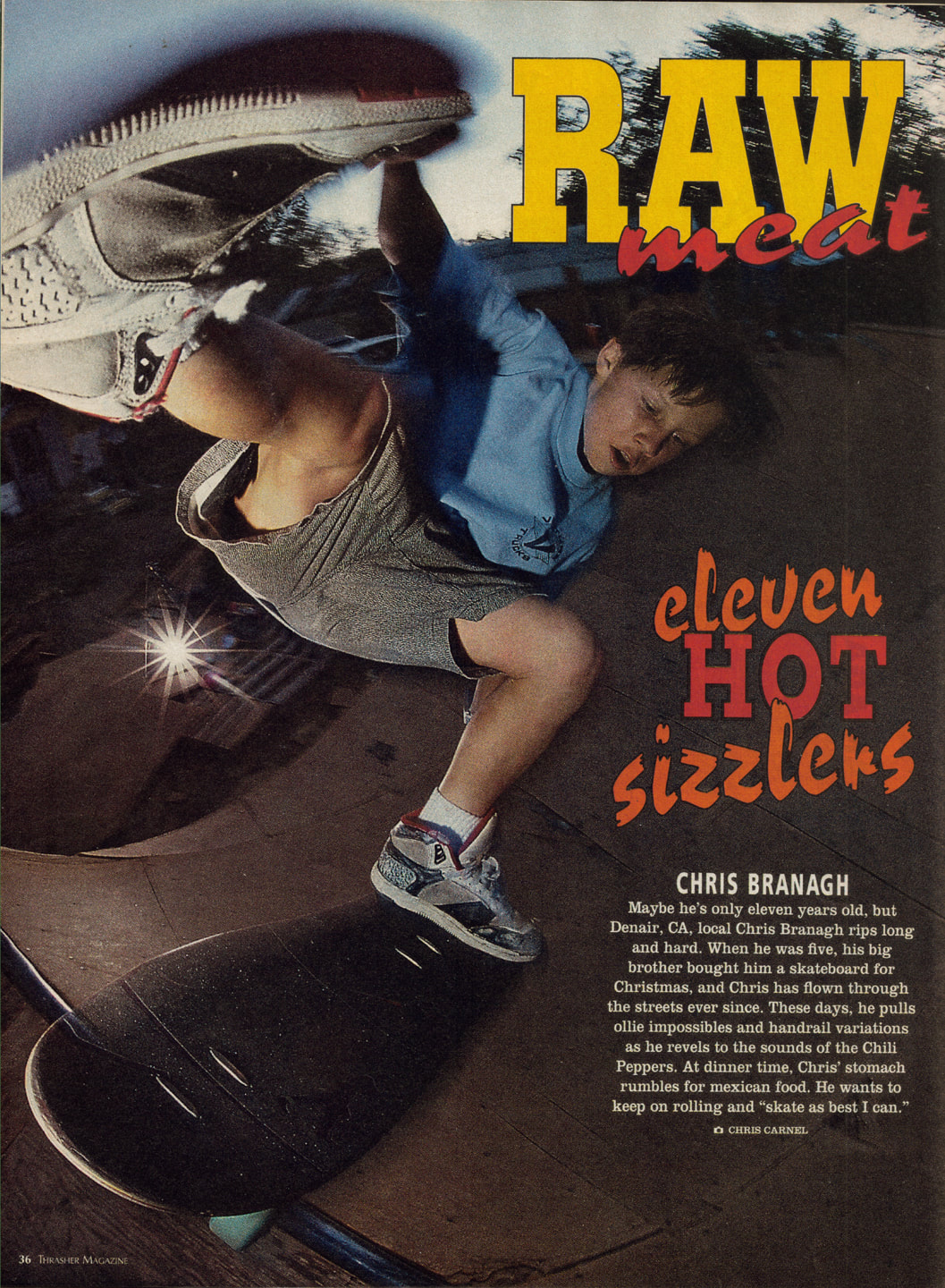 Alright, Chris, let's start right at the beginning, and for you that is pretty much when you were born. Most people first know you from your pre-pubescent section in Rubbish Heap back in 1989, but what year did you actually start skating, and how old were you when you first started?

Chris (orange lid) tic-taccing a day after getting his first board, and two days before getting on World.
Five, hahaha. Sick. So sponsorship must have come pretty bloody quickly, were you hooked up before World Industries at all?

Yep, I rode for Rocco when it was SMA. I only remember Rocco having two riders - Rodney and Jesse Martinez back when it all got started.
Were you entering CASL comps and all that? Were you doing pretty well?

Yes, I entered a lot of CASL contests all over the place and I guess I did well.
Must have been funny beating kids twice your age...

I guess, I honestly didn't pay attention. It was more about fun back then. Things sure have changed. 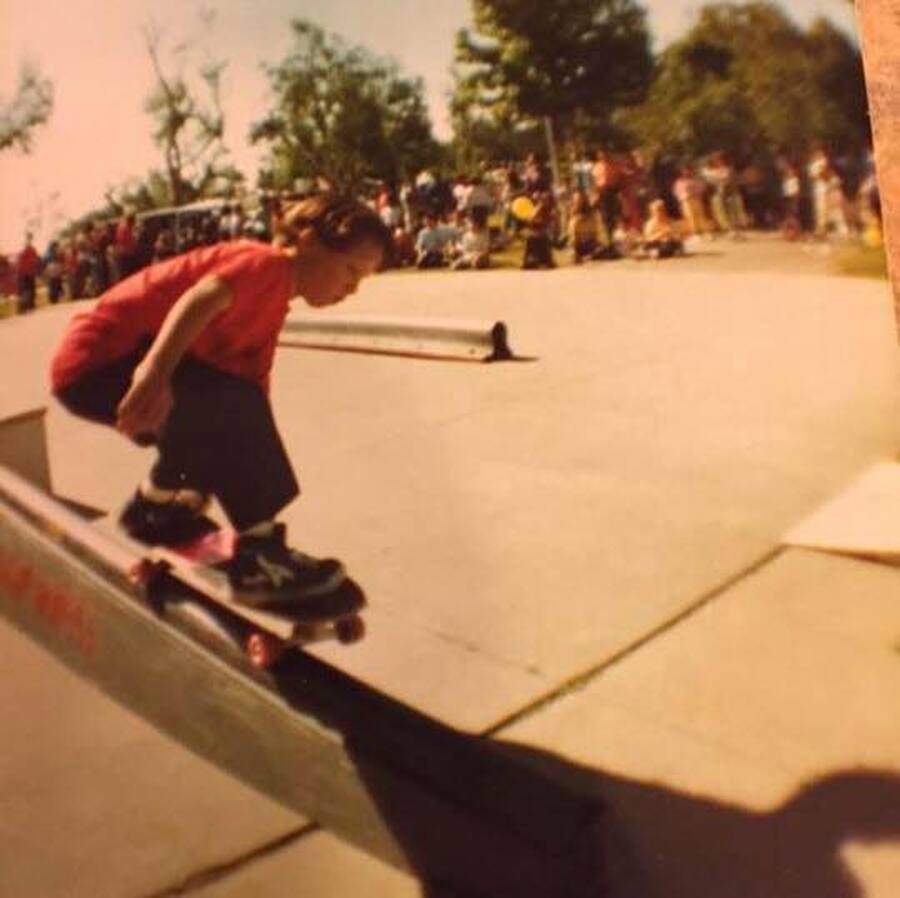 How did the World thing happen anyway? Sponsor-me Tape? World demo in your area that you skated at? Or did Rocco know your parents or something?

OK, here is what happened - I was at a contest and broke my ankle during my contest run. After my run Rocco and Rodney came up to me and asked if I wanted to be sponsored, I was like "sure sounds good to me".
How old were you at this point? 10?

7 or 8
Haha. On World at 8, amazing! So yeah, Rubbish Heap - it must have felt pretty good to get a part in that video, with legends like Ron Chatman, Jeremy Klein, Jeff Hartsel etc. Were you hyped on your part?

Dude, I filmed my part in a weekend. I had no clue on the magnitude of that skate video. It was no big deal back in the day.
And by 12 you were PRO? Is that right? How did that feel?

Yes man, I was super stoked. I might have been younger then 12, but yes it was cool getting boxes of boards. That was definitely one of the coolest parts.
Did you enter any pro comps? If so, how you did you do? Beat any big names?

Yes, I entered a lot of comps and that's a retarded question. Lol sorry. 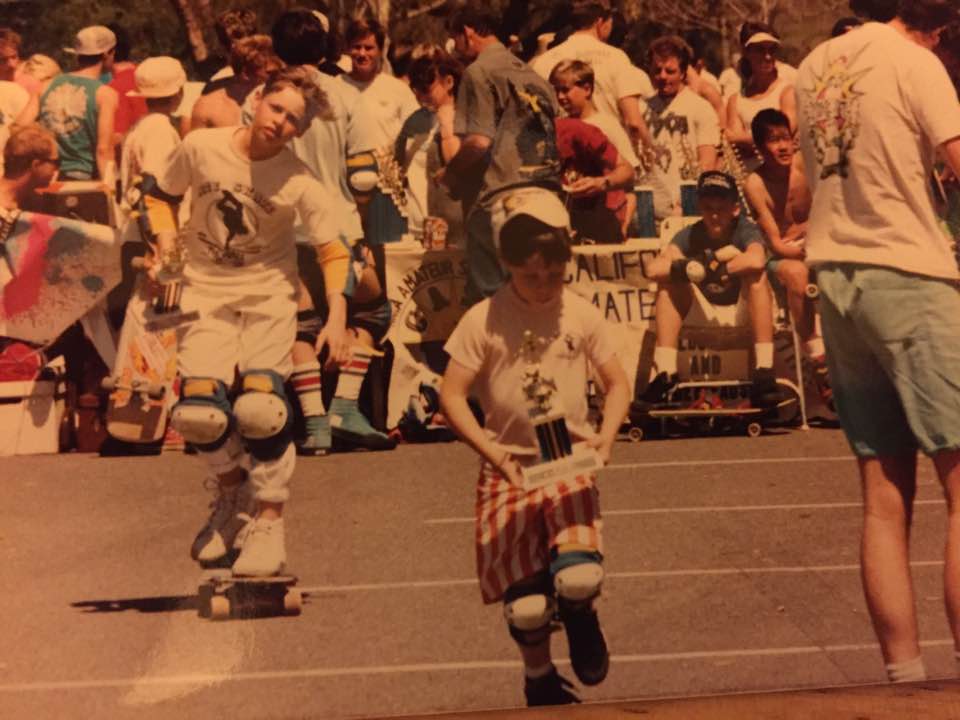 Hahaha, fair enough... World was popping off at the time, so presumably you did pretty well from being pro? (I actually had your Looney Tune Chicken Hawk board)

World was going crazy at the time, that's basically the time skateboarding was invented. Shit, skateboarding hasn't changed much. Check this old photo out not even a double kick board. 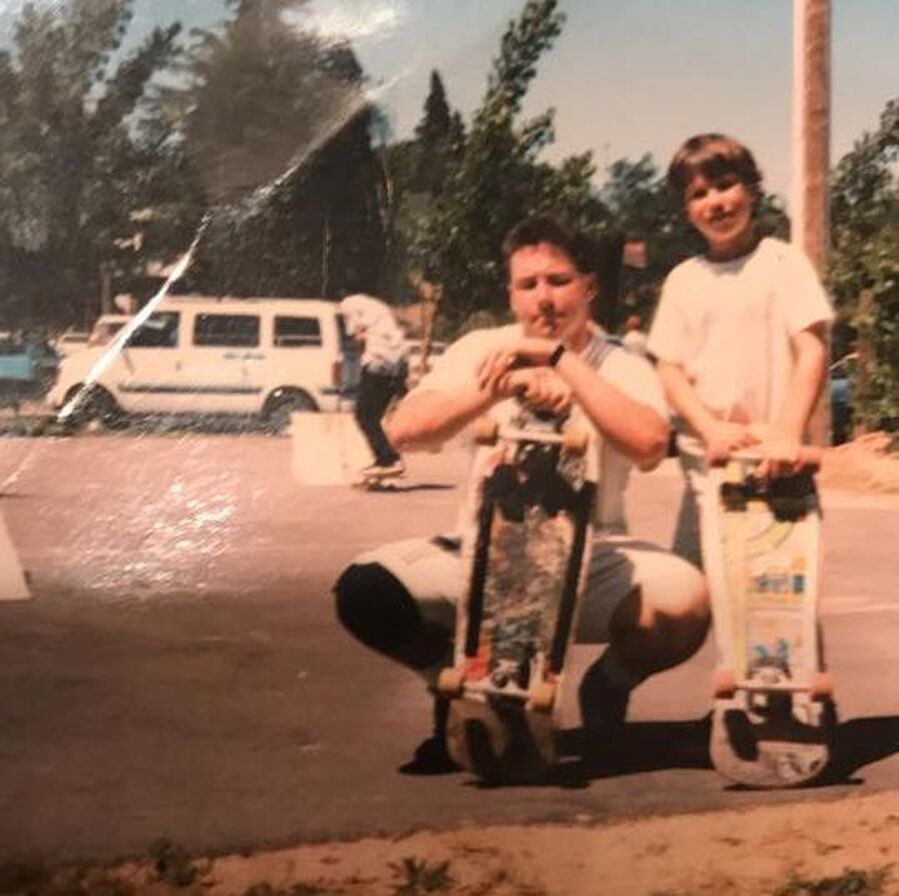 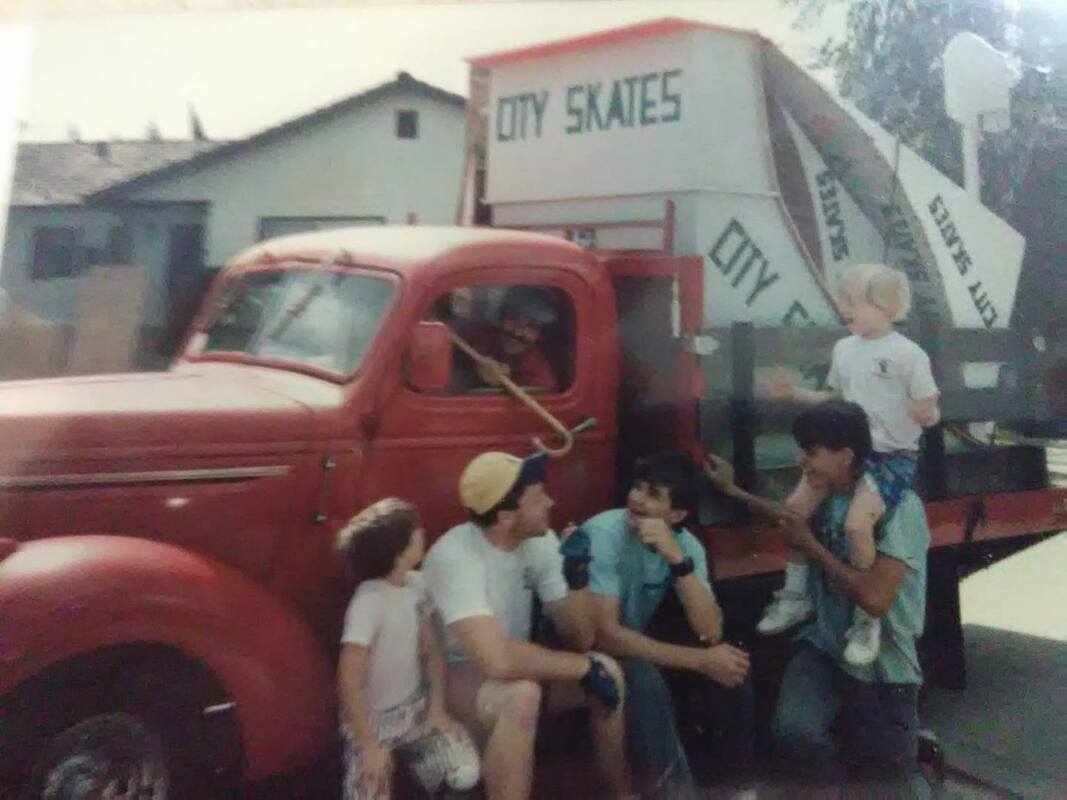 You only had two boards on World, is that right? The Looney Tune and the Mafia board hanging you over the bridge, or were there others?

That's it. After those two boards I went searching for Animal Chin. Lol shit.
Do you still have any of those boards?

Yes, 4 of each I believe.
Fuck yeah! Have you seen how much vintage World boards go for these days?

I actually have a couple of boxes of old stuff, I honestly don't even know what's in them. I know I have a bunch of decks. I even have some Think Crime stuff. 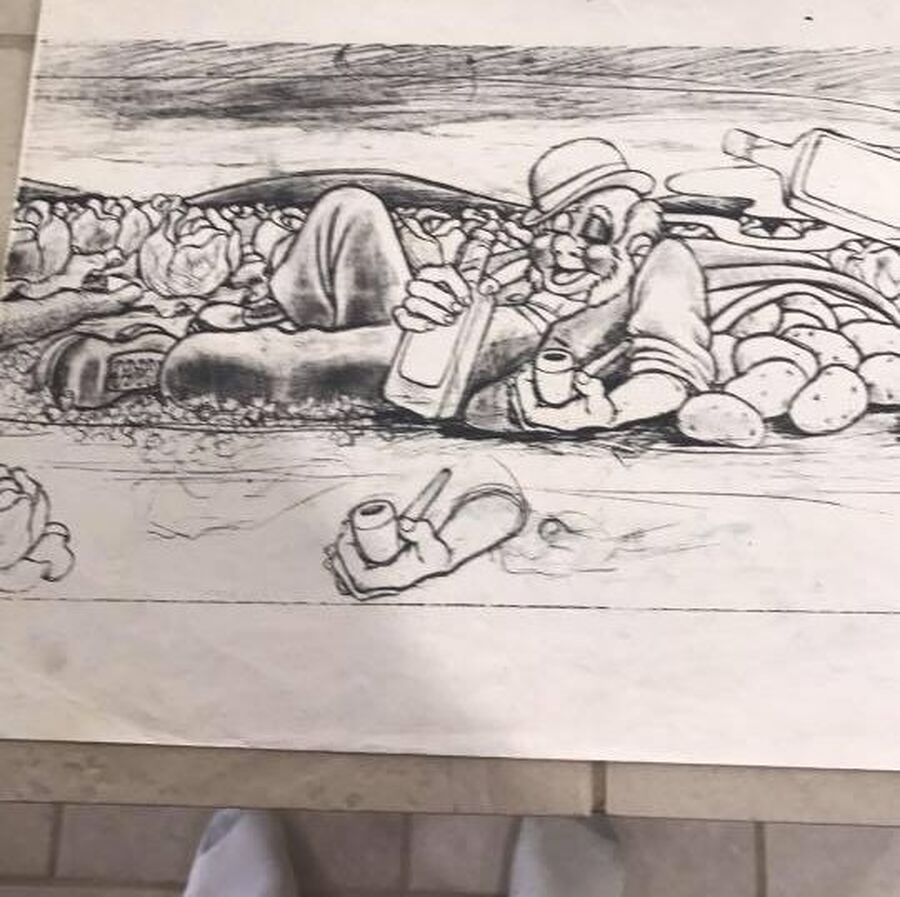 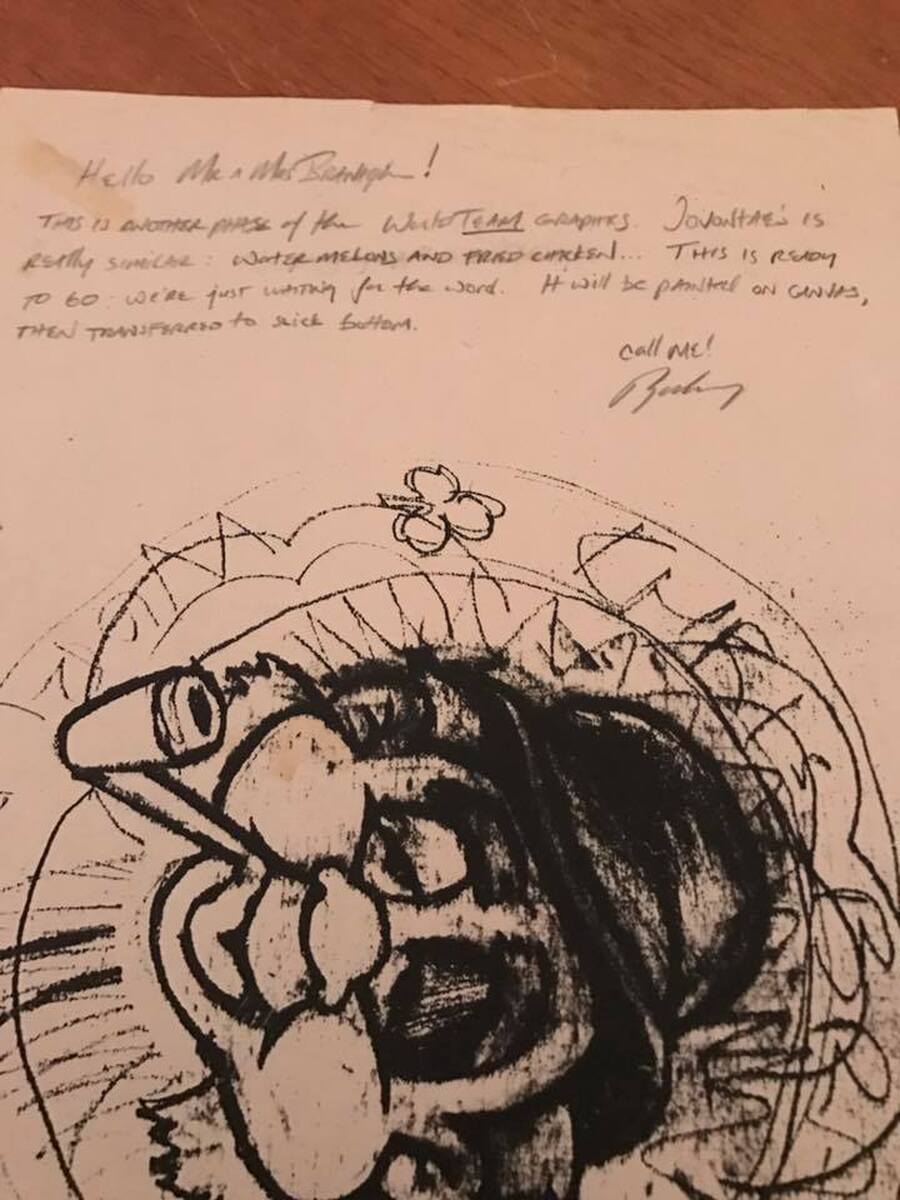 A letter from Rodney to Chris's parents.
Fuck, I’d love some of that for my collection... You should have a look. Would love to see pics. 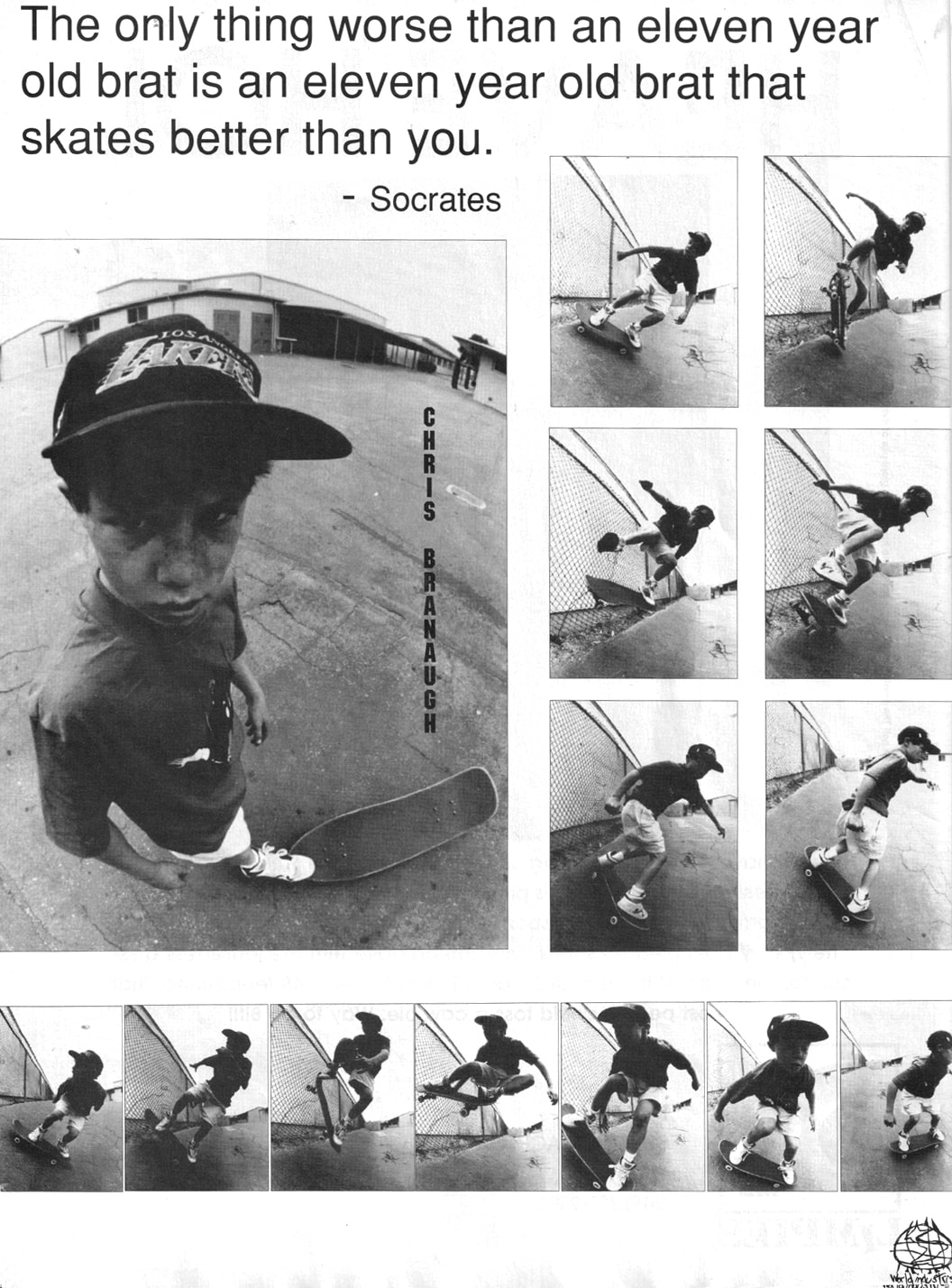 Care to indulge us on what was your biggest monthly paycheck during your pro era?

I honestly don't even remember, I'm thinking 3 or 4 grand but don't hold me to that.
We always hear about Rocco treating his skaters to whatever they wanted and buying them luxury items, how was he to you during your stint on World?

He was super good to me, anything you wanted you got. We had good times.
Most kids of 12 don't need much to get by, what were you spending all your money on?

I spent all my money on dirt bikes and hookers, lol. Joking about the hookers. Dirt bikes. 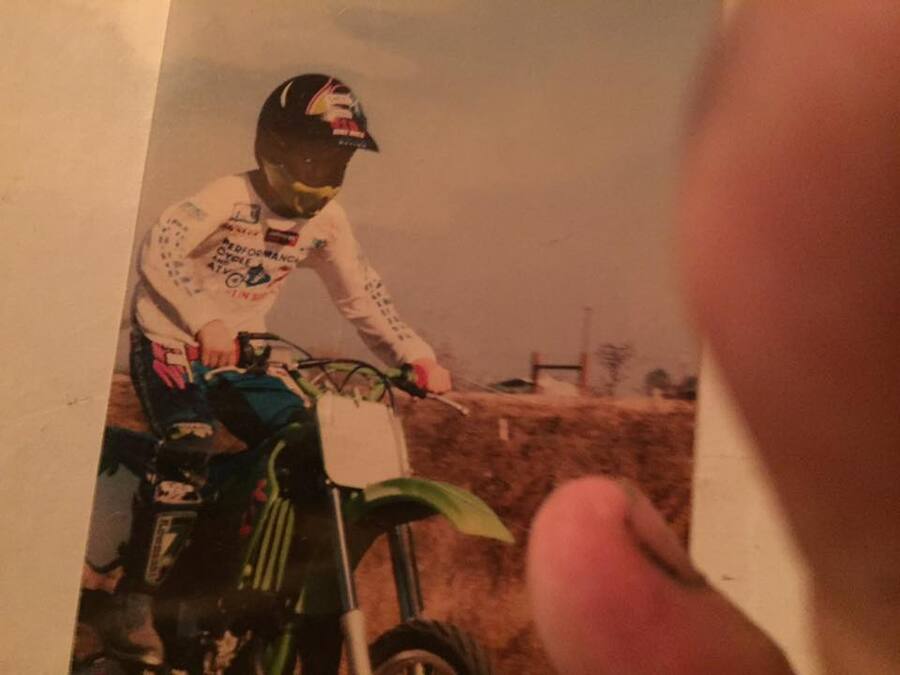 The perfect purchases for a 12 year old! Now, the World team... there is footage of them roughing you up a bit in an airport, and reports of Henry (Sanchez) hog-tying you with duct tape and throwing you in an elevator... was it just grommet-abuse the whole time?

Yes, I am sure I was annoying and deserved most of the shit they gave me.
Which of the team riders do you recall being the most torturous? Any particular stories of torment?

I'm trying to remember who fucked with me the most, but I don't recall one person being particularly torturous.
So it was all just fun then, who did you get with most on the team?

Shit, let me think about that one. It's been like a hundred years, so it's hard to even remember.
... You had a few pretty cool ads on World, was that story about the 'stupid' shirt true? 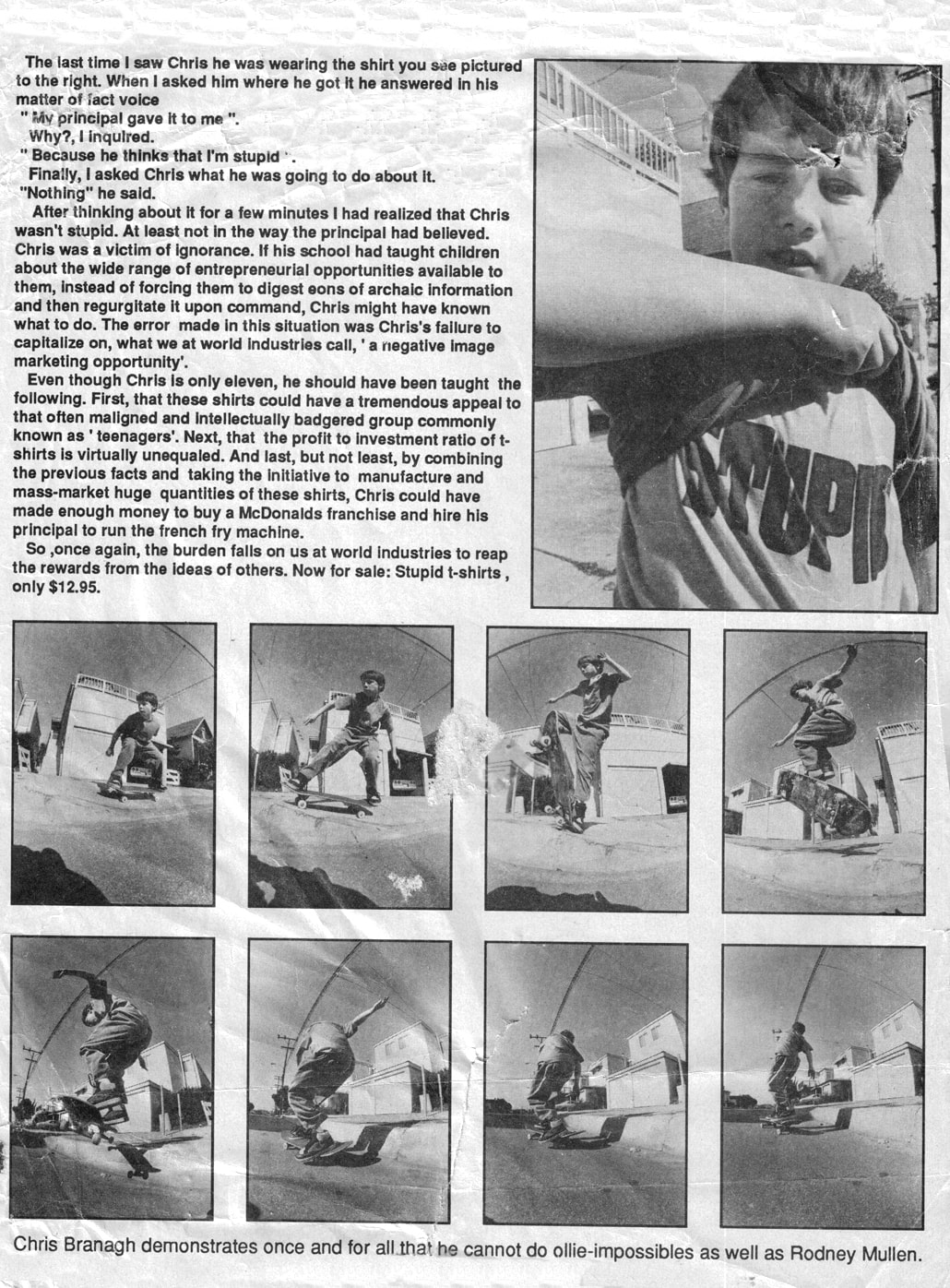 That story is beyond true.
Haha sick! That one with you and Jason Lee is pretty cool too... 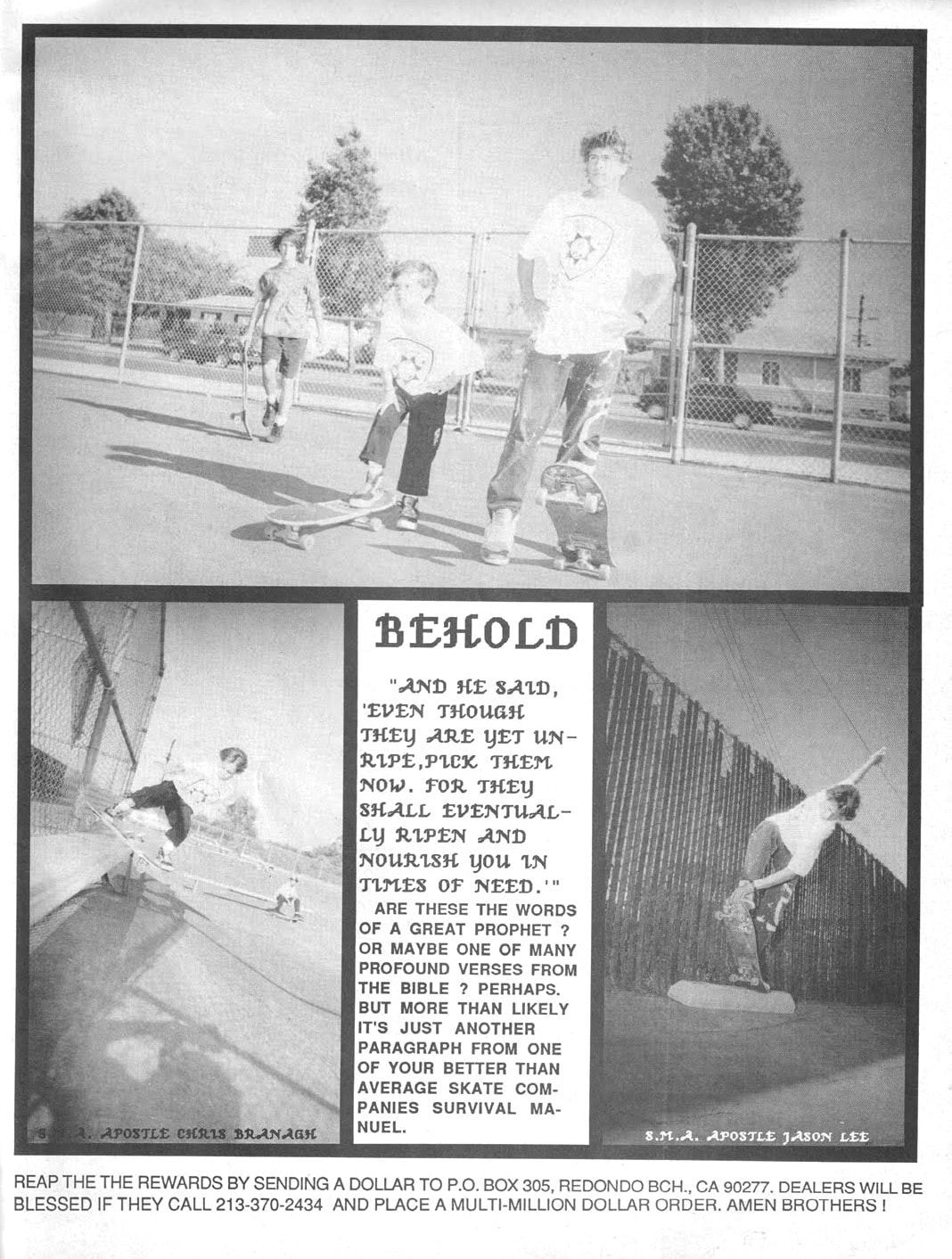 Lol, I remember that ad as well. That's so old and funny.
So yeah, your part in Love Child... How long did you film for that?

It took a weekend to film that part.
A weekend! Again! That Leroy Pullins song - "I'm a Nut", presumably that wasn't your choice?

It was not my choice, but I honestly don't even care. Back in the day things were different.

For sure. I actually liked it... And then afterwards there was bit in Big Brother about you being DEMOTED to amateur - how did that all go down?

I actually started riding for chapter 7, I never saw that...
​Oh, you didn't read that? Yeah, I think it was a joke. So you got on Chapter 7? I didn't know that. How long were you on there for?

​At least a couple of years. 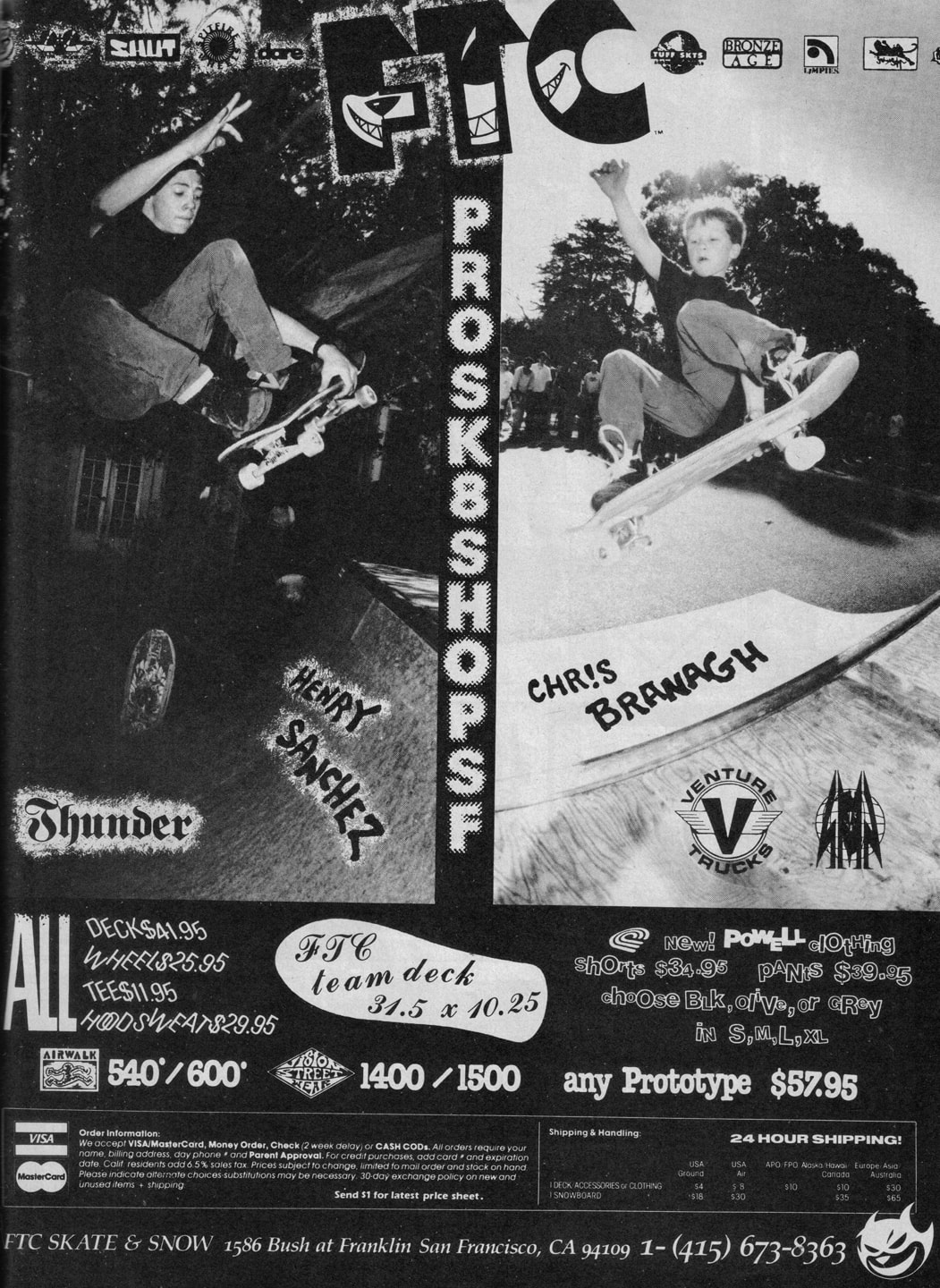 Cool, any footage or pics from that era?

Yes I will get them to you later on today. (Ed: this footage never materialised)
Excellent! Oh, and the worm - that's your brother eating it, right? What was the story there?

That's the brother that just passed away.
Oh for real? sorry to hear that.

They simply dared him to eat it, and he did. That's about it.
Ok, so after all this, what did you end up doing? There was an interview with your mum in Big Brother when you were 19, saying you were a welder?

I went to work, yes. I welded a lot. That's pretty much true.

Did you keep in contact with any of the other World skaters? Rocco? Socrates?

No one, I kinda just do my own thing.
What have you been up to since the sponsored days anyway, Chris? How is life?

Life is really good, I had a divorce and now a new girlfriend that is really supportive. I'm enjoying being sober from alcohol.

​Sick. Good to hear. Do you keep up with modern skating at all? Watch new videos etc?

Yes, it's beyond sick.
Any favourite skaters or just watch it all?

It's all good, no favorites
How about actually skating, you get there and throw down any backside 360s these days?

Lol, I skate but very few backside 360s.
Any messages for your old team mates? Or Rocco? 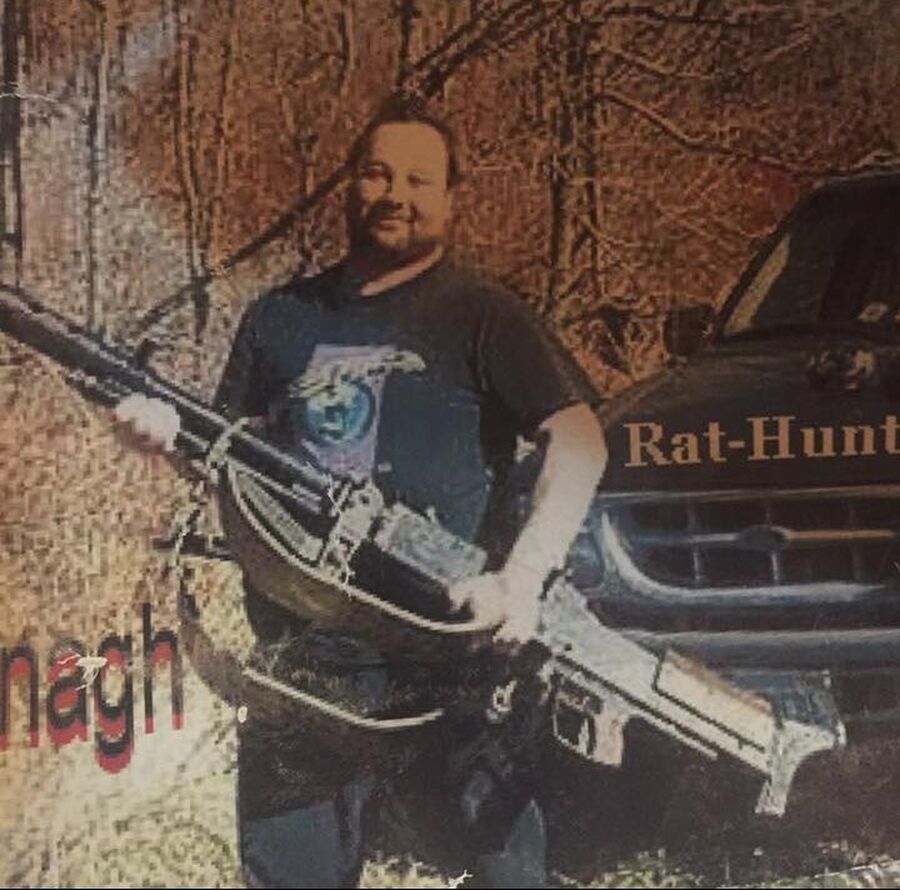 Cheers anyway, Chris. Have a sick day my man. 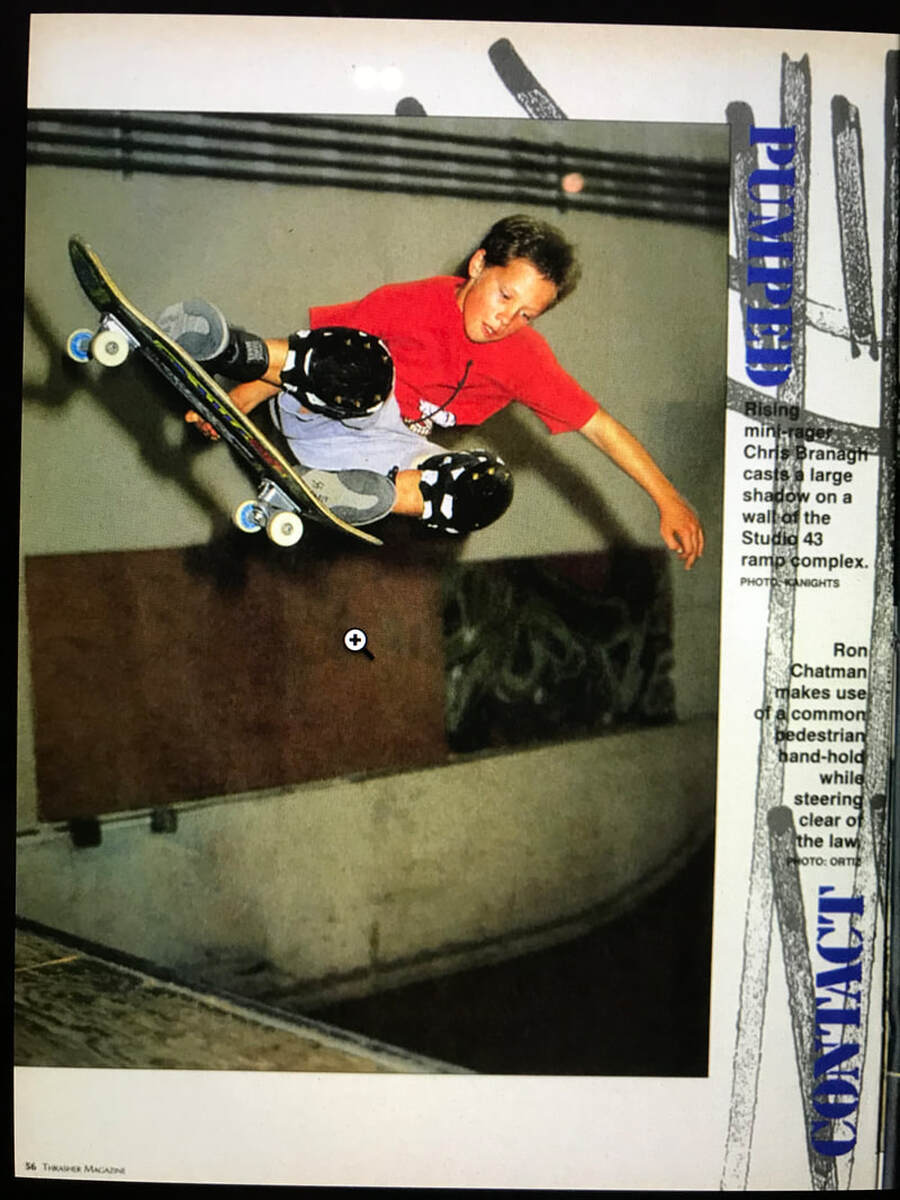 BA is a fan
Thanks to The Chromeball Incident and Chris for the photos.