The first time I saw GAVO was when Neal Hendrix posted an Instagram clip of a tiny kid on a vert ramp about a year ago. Although I fully respect Neal's judgement as a bonafide vert legend, during the second or so that I waited for the video to autoplay, I will admit that I let out a presumptuous 'oh god, another McTwisty kid that spins one foot out of the coping' sigh. Whilst those kids are obviously very impressive, their choice to only spin continues to confuse me - maybe 540s are easier if you are 2foot tall? Anyway, lil GAVO instead chose to do a backside 360 Judo to fakie - with a sick style. My interest was now definitely piqued, so I clicked on his name to see more - @Sk8inBaconBeast! Ok, so now he had two ticks, unexpected tricks and a bloody brilliant name. I was sold.

We hit up GAVO for an interview (via his dad), so see what makes this lil tyke tick. Gavin Bottger is 10. 10 years old.

Oh, and regarding the McTwist kids... don't get it twisted, GAVO can twist as well, with height and power, it's just that his trick selection goes much, much further than that. 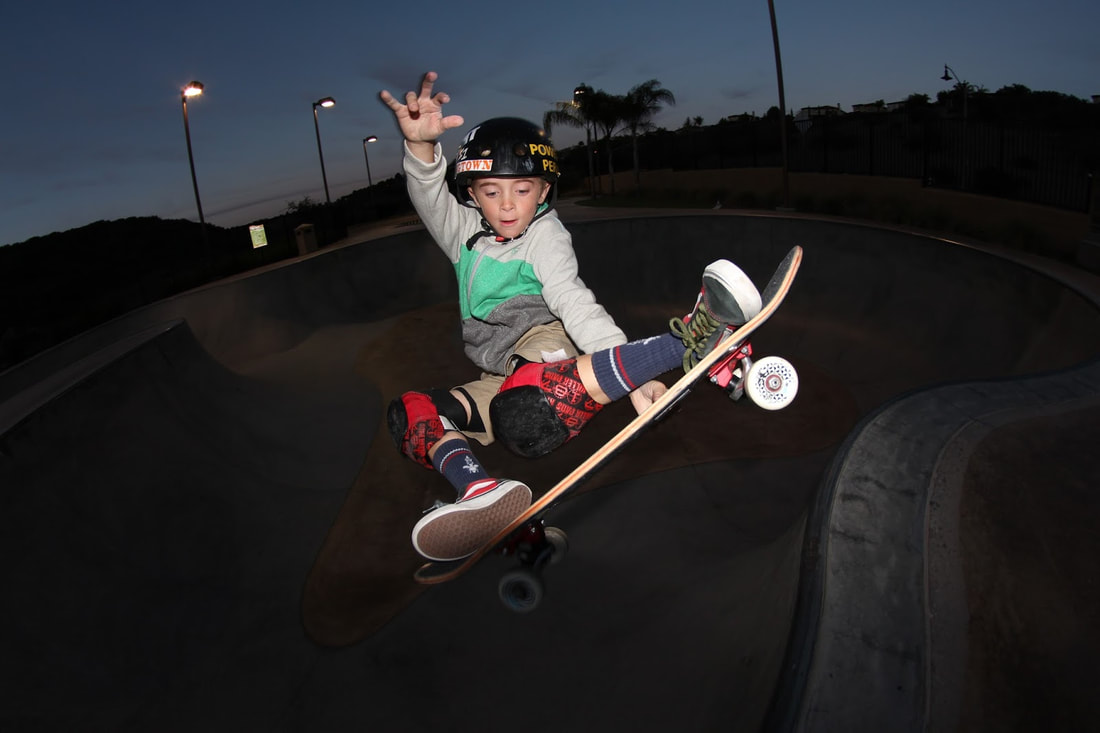 Alright GAVO, let's start with the really important stuff. What is the background behind your name, Sk8inBaconBeast? Presumably, you are a big fan of bacon?
The name sk8inbaconbeast came from a Halloween costume a friend had of a bacon strip. He called himself skatin bacon, I just added the beast.
Haha, ok. Before we get into skate stuff. Is there anything else you are into besides bacon and skatin? Any other hobbies, tv shows or normal kids stuff?
When not skating I like playing the drums, snowboarding, surfing, hanging with friends. I like to draw, jump on trampolines and build Legos. Anything that's fun I'm into.
So usually we start interviews asking when people started skating, but with you it simply must have been some time this decade??!!! When exactly did you start, man?
I started skating at age 5
And how long did it take you to do your first ollie? First drop in?
Maybe a couple weeks, I dropped in on a 4' mini ramp.
Amazing. What got you into skateboarding in the first place?
My dad got me into skating. He took me to the skatepark and I was hooked from day one. I've skated almost everyday since.
I have seen some clips of you ripping the street as well, but were you into transition from the start?
I've skated everything from the beginning. I like skating transition cause I like to go fast and blast.
I am a big fan of your Madonnas and all the tricks you do to tail-slap and into fast disaster-clack. What are some tricks you are working on at the moment?
I'm working on back nose blunt reverts, front blunts, frontside flips. Technical tricks.
I think it's about time signature tricks made a comeback in skateboarding, what would be the Bacon-Air?
Not sure what a bacon air would be, all I know it would have to be big!
Clearly you have got some very hard tricks on lock, but are there any simple tricks that everyone else can do easily that you find really hard?
I struggle with back smiths and front feebles.
So, you must have seen that a lot of the younger micro crew of vert skaters love to do 540s and 720s and every other type of spin - why do you think kids find spinning easier than the older skaters?
I don't know, maybe cause we don't know any better and older dudes slam harder
On that note, if you had to describe how to do a McTwist to someone, how would you put it into words?
Gotta go big first of all, keep your chin tucked on your shoulder and get your head around as fast as possible to spot your landing.
How long did they take you to learn?
I learned the McTwist in a couple days at Woodward when I was 8. It was a battle. I kept landing it and sliding out in the flats. Now I got them pretty much on lock. 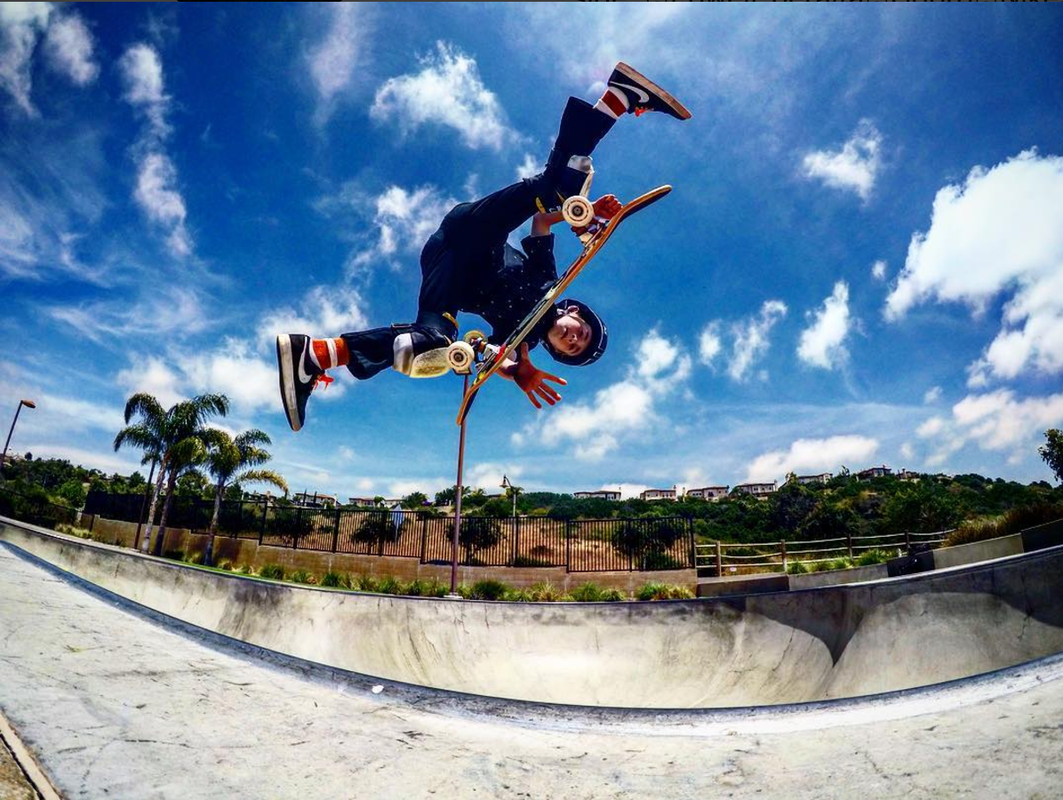 Of all the kids around your age, who is the best/biggest threat to your vert domination?
I wouldn't say I dominate vert.  Haha But my friend Evan Dorghty kills it on vert.
Are there any kids that are even younger than you that you know of that rip? Surely we are going to see kids in nappies and kneepads soon.
My friend Fox Bruner is insane. He's so good it's ridiculous. My little brother started skating at 2 in his diaper.
As a fully grown adult that has been skating 3 times as long as you have been alive, it really pains me to ask you this - but do you have any advice for a good backside smith grind?
No I don't, the back smith is a thorn in my side.
You have a lot of sponsors now, how is that working out for you? Any sponsors you'd like to get?
Yeah, my sponsors take good care of me. I feel extremely blessed for all the support, especially from my parents. I wouldn't be anywhere without them. I always wanted to get on Volcom, they just seem like a rad company.

You moved from South Tahoe to Oceanside, California - did you and the family move there because of skating/sponsors?
Yeah, my parents sold everything and moved the whole family to S.D. so I could skate all year long. They rule!!! It snows a lot in Tahoe in the winter and there isn't much to skate.
On that note, your TM at Powell used to live in our home town in England. Did you know he ripped up a vert ramp too?
I didn't know that. I only skated with Deville at Vans on the mini ramp.
Have you ever skated the Mega Ramp? If so, what have you got over the gap?
I skated mega once at Woodward west when I was 8. I was too light to get over the gap, so I just rolled it so I could get as much speed as possible for the quarter.
He's getting on a bit at the grand old age of 13, I know, but what do you think of CJ Collins?
Me and C.J. are buds, he definitely kills it and is super gnarly.
What about Asher? He is 13 as well. Do you see him as a mentor, a friend, or as competition?
Asher is cool, I see him a lot at contests.
Oh, and the TMZ rumour-mill is saying that there is a blossoming relationship between you and Sky Brown. Tell us about that. Are you mates with her brother Ocean?
Me and Sky are friends. We all skate together when they're in town. Ocean is a little savage, I love that little dude.
Haha, alright man, what is next for the Bacon Boy anyway?
This summer has been epic. I got 3rd. at Dew tour, got to skate at my first X-Games. I'm headed to Woodward PA for 2 weeks to film the camp Woodward show, home one day and then hit the road for 2 weeks with the Powell-Peralta team. Super stoked on everything.
Excellent, thanks so much for doing this, BaconBeast. Keep on doing your thing, and making the rest of the skateboard world feel very, very old. Cheers you lil legend.
Thanks dudes, SKATE or DIE.
Follow Muckmouth on Instagram
Daily updates on Facebook